Problems placing your order? Email us at totallyiowa@aol.com and we'll help!
"The Floppy Show" BOOK! 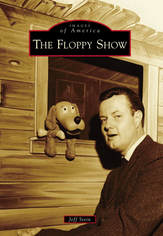 "The Floppy Show"--by Jeff Stein
In 1957, WHO-TV asked staff performer Duane Ellett to come up with an idea to help teach children how to better care for their pets. Ellett created Floppy, a high-voiced beagle dog puppet that became his sidekick for the next 30 years. Together, the iconic duo made 200 personal appearances every year at community festivals and events. The Floppy Show aired weekday afternoons in part of four decades, featuring a live studio audience of children telling Floppy riddles, beeping his nose for luck, and watching cartoons. On weekends, the duo appeared in a variety of programs over time, from the S.S. Popeye in earlier years to The Floppytown Gazette in the 1980s, featuring Floppy and other puppets Ellett created. Thousands of Iowans outside of Des Moines discovered the duo from their performances at the Iowa State Fair. Even now, 30 years after their last television appearance, Duane and Floppy still hold a warm place in the hearts of baby boomers across America. Author Jeff Stein is recognized as Iowa's leading broadcast historian. He is the author of five books, including three on Iowa broadcasting.
(Paperback; 183 photos; 128 pages--Arcadia Publishing, 2018)

"Floppy and the Stars"--The Duane and Floppy Collection, DVD Volume 2
Featuring the complete episodes of "The Floppy Show" featuring Bill Cosby and Adam "Batman" West, the special
"Thirty Years of Fun" retrospective program, and a never-before-seen stage appearance by Duane and Floppy from 1966.
(total time 80 minutes--produced in 2010)
$17.50 -- FREE shipping and handling = $17.50

"Floppy at the Fair"--The Duane and Floppy Collection, DVD Volume 4
While Duane & Floppy were well known to central Iowans through their programs on WHO-TV in Des Moines, thousands more
knew them through their appearances at the Iowa State Fair. Includes material recorded on film in the 1970s and 1980s.
(total time 117 minutes--produced in 2014)
$17.50 -- FREE shipping and handling = $17.50